Ever since the Jalsa Salana’s humble beginnings, it has become a tradition that members from the community, and even external members, speak on various topics and address the participants of Jalsa Salana.

Even today, the community’s scholars speak on various issues and topics during the course of the Jalsa Salana in the different sessions.

However, the most anticipated speeches are the keynote addresses of Hazrat Khalifatul-Masih (aba), who traditionally speaks multiple times throughout the Jalsa Salana UK over the three-day period.  As well as inaugurating the Jalsa with an Inaugural address, Huzoor (aba) delivers a Friday sermon, address to the ladies, address to guests and dignitaries and finally Huzoor (aba) concludes Jalsa Salana UK with a closing address. 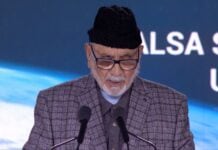 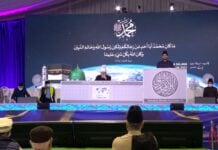