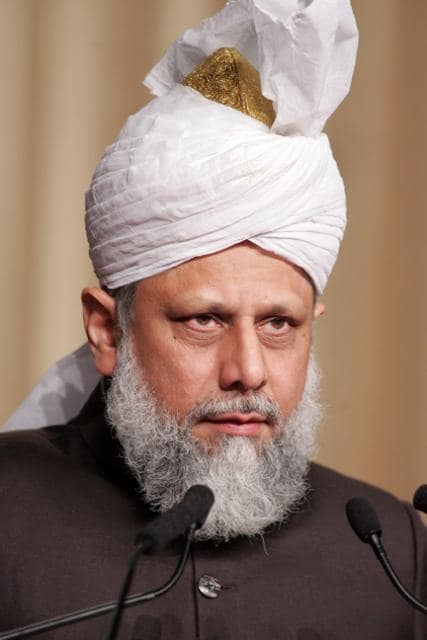 There’s an ache in your feet as you stand on the crowded sidewalk. You’ve been waiting for a couple of hours, but it feels like forever. All of a sudden there’s a shout, you crane your neck to see what the commotion is, only to find the car you were waiting for, turning onto Ahmadiyya Avenue, part of a police led motorcade. As that car passes by, you see Him. The traditional white Pagri, and that unforgettable  smile; Huzoor has arrived.

For a moment, as you wave with the rest of the crowd among all the shouts of ‘Assalamo alaikum Pyare Hazoor’, you feel as though those sharp eyes have seen you, his gaze acknowledging your presence. The pain in your feet is forgotten, the hours you’ve spent waiting are now a distant memory, as you rush with the rest of the crowd. Following that black car to the house where Huzoor will be residing. You wait with bated breath, as Huzoor steps out of the car, holds up a hand signalling his Salam to all those who have gathered, before disappearing into the house.

From Huzoor, a distinct holiness is exuded. You don’t need to be standing next to Huzoor to feel it, you could be standing a few streets away and it’ll still draw you in. It’s this magnetic attraction that causes us to follow Huzoor wherever he goes, without a second thought. We witness similar scenes, no matter which country or continent Huzoor visits; Canada, America or Africa. Like birds we flock to our leader. Like moths we follow this brightly lit flame of Khilafat.

I feel that this is especially true when Huzoor graces us with his presence for Jalsa. Personally, I always look forward to Jalsa every year. Over the course of three days, I feel spiritually renewed and closer to Allah. However, when Huzoor makes a visit to Canada those feelings, along with excitement, are all heightened. All anyone can think of during those days is ‘When will we see Huzoor?’

That’s what fuelled me during Huzoor’s last trip to Canada. It had me up at all hours and ready to be at Bait-ul-Islam mosque. For the two weeks that Huzoor stayed in Peace Village, I was fortunate to have countless mulaqa’ats with Huzoor. No matter how late I slept, I knew that I couldn’t miss this opportunity. Just the thought of seeing Huzoor walk by as he made his way to the mosque, forced me out of my bed and got me ready to head out for Fajr. It didn’t matter if I was tired, or if I was late in coming home from the Jalsa gah, if it was namaz time I would rush to find a place to read namaz behind Huzoor. That was the result of the magnetic field that comes with Huzoor.

Like me, lots of people felt the same magnetic pull towards Khalifatul Masih. They were alongside me waiting day after day for Huzoor to appear, filling up sidewalks, gathering in front of his residence, collectively greeting Huzoor, before rushing to the mosque; because they too understood how special and spiritually purifying these moments were. If the prayer hall was full, you’d find them reading among the shoes, their foreheads separated from the tiles by a thin sheet, or in the marquee outside, or the grassy knoll near the mosque, as well as in and around Tahir Hall.

Such scenes aren’t unheard of when world leaders or celebrities come to town; but can they really compare to this religious gathering or seeing men, women and children, follow this seemingly ordinary person? A growing flood of people trailing after him shouting their heartfelt joy, as he walks down street after street, passing house after house in Peace Village? I don’t think so.

In fact, it’s his nearness to Allah that draws us to him; creating this intense magnetic attraction that causes our hearts to burst when Huzoor is present. Through him, our bonds with Allah are strengthened. He’s the magnet calling us to Islam and Allah, and we’re the iron filings that gather around him accepting his call.

It’s also why we all feel sad when it’s time for Huzoor to leave. After experiencing such a blessed happiness and nearness to such a holy presence, the grief of being separated and watching him leave is almost unbearable, but what lightens our hearts is the hope that Huzoor will return next year, and in the meantime we have MTA to connect us with him.