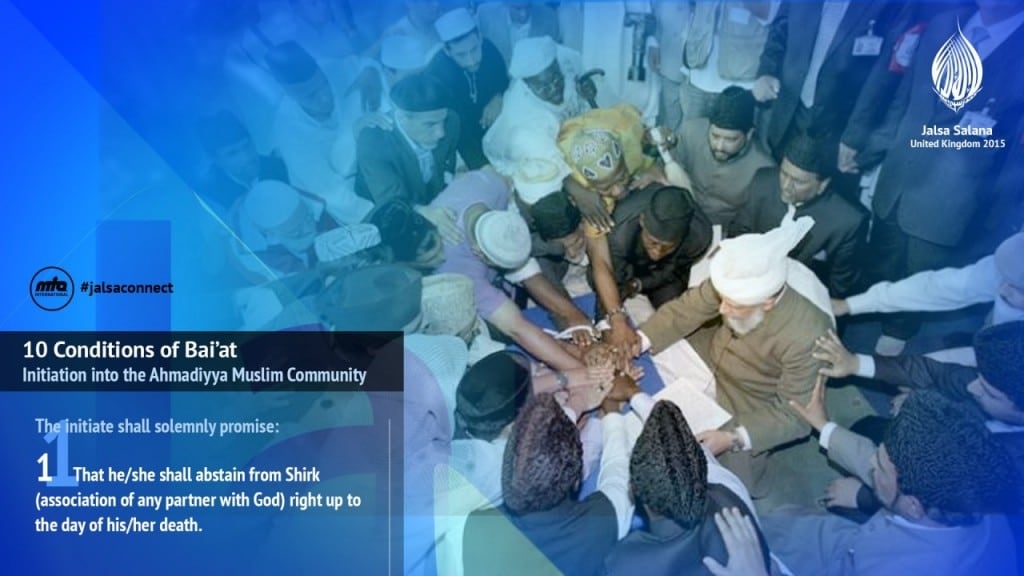 A collection of personal experiences of Ba’ait from Jalsa attendees:

“I was at Jalsa and for once had time to walk not run to Ba’ait. As I walked there, I thought of how Ba’ait is like cleansing yourself and making a fresh slate. I then thought of each of the prayers said during the ceremony and remembered how forgiveness places a vital role in them. So I decided I should make the most of Ba’ait. I would think of each sin that I knew I had committed and ones that perhaps on reflection was a sin. By the time I sat down, I could already feel the tears down my cheeks. I could see ladies looking curiously at me from the corner of my eye. It didn’t matter. In that moment, it was God and I. There were hundreds of people in the room but it could just have easily been myself alone with God. As Imam Sahib practiced each Prayer, I felt each one hit me hard in the chest. When Huzoor took over, the tears increased and as I went into sujood (prostration), it all came out. As I rose, I realised something that I had not previously known before. It hit me like a brick in the face; that in this world it is just you and God. For other people, it is them and God. People come into this world all seeking the same thing. They each have their own path. During what to others would have seemed long, but to me brief, I saw what I had longed for, for so long. In that moment, it didn’t even matter that I was Ahmadi, Muslim or even white. What mattered was that I was alive and I could feel God all around me. Fingers shaking, carpet and cheeks thoroughly soaked, I felt a smile across my
face. A genuine, happy smile. I had the acceptance that I had wanted for so long. That is when I became with girl with no face because outer beauty did not matter to me anymore. I did not care about the fact that I did not have this or that because I had gained what so many people lack. I gained identity and self-acceptance because in that moment I felt God accept me. It confirmed what I had always known but never believed. I can honestly say, hand on heart; I have never been so happy. Sure I still have days that could be better, but in the heat of the moment, I remember that moment that God gave to me and everything disappears…”

“International Ba’ait is such an emotional time. You get so lost in the moment that the whole world is drowned out. All you can hear is the voice of our beloved Huzoor and when the emotion overtakes him, you hear that crack in his voice; you feel that same crack in your heart. Tears of sadness and repentance stream down your face and everything just intensifies the second you go down in sajda. In that sajda, you’re before the Almighty begging for forgiveness as everything you did in the past plays in front of your closed eyes and anything that can cure that pain you feel at that moment, can only be cured by the forgiveness that you are seeking from God. A truly emotional but blessed experience.” – Labiqa Qamar, Midlands Region.

“As a convert, I feel there is a common, fond love of the international ba’ait. The atmosphere is of pure sisterhood and spirituality; everyone leaves feeling morally uplifted and revived.” – Melissa King, North West Region. “The international bai’at is difficult to explain in words and must be felt to truly be realized. The hush that fell over the crowd, the rapt attention and the sense of awe and unity was indescribable. I reached out my hand to hold the shoulder of a woman I did not know but felt intensely close to. I looked to my left and right and saw other sisters merging, hands to shoulders, heads bowed with tears flowing. People who may have never met and may not be able to share a single word in conversation, because they are from opposite ends of the earth, were here together, in the beautiful English countryside, crying and praying, expressing their commitment to their Lord. Without language this was understood. As the words were repeated…“I have wronged my soul…” I felt the energy and remorse, the naked emotion of thousands of people who simultaneously wanted to be forgiven and renewed by reaffirming their connection with their Creator. Rows upon rows of sisters fell helplessly to their knees in sajdah (theprostration position of formal Islamic prayer) as tears flowed freely. The yearning in my heart was unlike any feeling I can recall. I do not remember when I felt so deeply aware of my own shortcomings while also feeling such an intense love for
God and my Community.” – Aliya Amatul Latif, USA Jamaat.

The International Ba’ait is one such event, where the emotions are so powerful that these divinely united vibes can be carried across MTA and have people, who are watching from miles away, become as engrossed and as affected as those here. To be there taking part is an experience like no other and to help you all to prepare for it, there is one last part in which we discuss the mental and spiritual ways to help my brothers and sisters prepare for what can only be described as a truly life-defining moment in which your soul reconnects with its Maker.