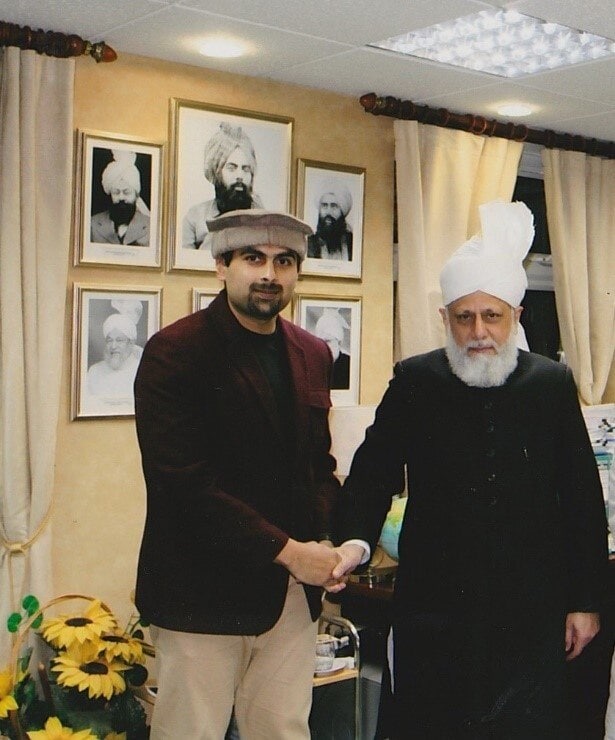 Jalsa Salana United Kingdom 2017 was my first Jalsa without my brother, Murrabbi Mazhar Ahsan who passed away in September 2016. I was quite apprehensive about how I would feel during the 3 days, however, my nervousness would not have stopped me from attending, as my love for the Jama’at was instilled in me by my mother, and this love was strengthened by the guidance of my beloved brother.

When my brother was diagnosed with leukaemia in September 2015, these were the words he comforted our mother with, so that she would continue serving the Jama’at, especially during those tough times:

“There is nothing in this world that can stop us from serving our Jamaat. We should always endeavour to serve our Khalifa-e-waqt and Ahmadiyya Muslim community with full dedication and devotion.”

Despite only just recovering from a stem cell transplant and undergoing high intensity chemotherapy and radiotherapy treatments, my brother convinced my family to attend last year’s Jalsa Salana UK without him.

At the time, he was only allowed to eat freshly prepared meals and he had certain restrictions imposed upon him by the doctors, so leaving him alone was not an easy task. However, such was his devotion to the Ahmadiyya Muslim jama’at that he made us attend the Jalsa Salana while he stayed alone at our house in Glasgow.

Because of my brother we were able to enjoy the Jalsa thoroughly and became a part of this blessed event. Although we were sad that my brother could not come and attend the Jalsa with us, we were also extremely happy that we were able to hear the live addresses of our beloved Khalifa during the three days at Jalsa and experience the spiritual and emotional International Ba’ait at the hand of Khalifa-e-Waqt.

I was honoured to receive an Academic Award during the Jalsa from our dearest Huzoor (aba). When I approached Huzoor (aba) to receive the award, he immediately asked me about my brother’s health and how he was doing, in front of everyone, and this audio was broadcasted live from MTA to the whole world. My brother was recording the proceedings on MTA, from his phone, when I was receiving my award. Upon hearing our Dearest Khalifa (aba) asking about my brother’s health, my brother became emotional and overwhelmed. He could not believe that someone as insignificant as himself was being remembered in the prayers of our beloved Huzoor (aba).

The same incident is mentioned in an extract from ‘UK Jalsa Salana 2016 Part 2 Diaries: A Personal Account’ by Abid Khan:

“Prior to Huzoor’s address to Lajna, he distributed prizes to dozens of Lajna students who had excelled. As I watched on the screen from the men’s Jalsa Gah, I noticed that when one girl approached, Huzoor asked her how a member of her family was. It later transpired that she was the sister of Mazhar Ahsan, a graduate of Jamia Ahmadiyya UK who had been seriously ill with cancer. Though at that time, he was said to be recovering, it was the Will of Allah that he passed away in September 2016 (To Allah we belong and to Him shall we return). When I saw Huzoor ask the girl, I was amazed at how even at his most busy times, Huzoor still finds the time to comfort those who are in need or facing difficulty.”

My brother also enjoyed the Jalsa experience by watching the live coverage on MTA; which he watched from start to finish. He made notes of all the addresses delivered by Huzoor (aba) in his diary. He also recorded short interesting clips from the MTA coverage on his mobile, which he would share with us. We would also in turn share various Jalsa related pictures so that he would feel as if he was a part of this blessed event.

As my brother could not attend the Jalsa last year, he was unable to do the duty assigned to him, alongside his Jamia colleagues in Tabshir. By the Grace of Allah, and by no coincidence, my mother and I have been assigned the same duty at this year’s Jalsa, and we are working in the Reserve 1 guest marquee. It feels like we are representing Mazhar while doing the duty he could not perform himself.

During this year’s Jalsa Salana, another amazing thing happened. On Friday, my mum and I were sitting in the Ladies Jalsa Gah before the start of Friday sermon when we heard the announcement of the names of people who passed away between last year’s and this year’s Jalsa UK as way of remembering them and praying for the departed souls. The second name that was announced was that of my beloved brother, Azizam Mazhar Ahsan. We had mixed emotions of happiness and sadness combined when we heard his name. Alhamdulillah this time as well Allah Almighty provided us with a special Jalsa moment that we will remember forever.