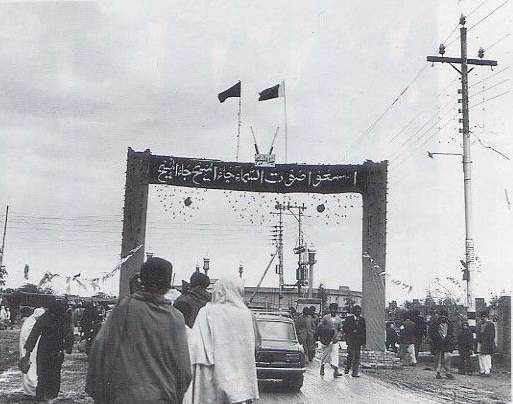 Lajna Imaillah’s value and participation in the organisation and the smooth running of Jalsa Salana is never overlooked and is always much appreciated.  These incredibly hard-working hosts sacrifice their time, sleep and families to dedicate every ounce of their being to the spiritual event.
It is not widely known, however, that it was in 1914 that ladies first attended Jalsa. The extraordinary Khilafat of Hazrat Mirza Bashiruddin Mahmood Ahmad (may Allah be pleased with him) saw the most extensive changes in the lives of Ahmadi women.  During this era, women were encouraged to progress in the field of religion as well as focusing on their education and training.  A directive was issued that no woman should remain illiterate. In the early 20th century, Ahmadi women were encouraged to take part in debate competitions.  In preparation for Jalsa, Hazrat Khalifatul Masih II (may Allah be pleased with him) organised lectures for the women attending. It was hoped that women of the Community would derive great benefit from those opportunities. In the same year, four days (25th – 29th December 2014) were allocated for the Jalsa Salana. But lectures for women were scheduled for 27th, 28th, and 29th December. The number of women attending was 400.
Al-Fazl reported: “Considering that this was the first women’s Jalsa Salana and that it had also not been very widely advertised, the attendance was sufficient and satisfactory.” At this Jalsa, Hazrat Ummul Momineen (may Allah be pleased with her) and some of her relatives made huge efforts with regards to hospitality of the [Jalsa] guests, to the extent that she cleared many of the important rooms in her house for women and arranged for their meals herself. During the occasion of the Jalsa Salana 1917, it was announced that a separate Jalsa would be held for women, in which Hazrat Khalifatul Masih (May Allah be pleased with him) would deliver two speeches.  This was the first Jalsa for women that was organised separately. One speech was given on 26th December and the other on 29th December. The accommodation and meals for women were organised at the residence of the Promised Messiah (on whom be peace) and the residence of Hazrat Khalifatul Masih I (may Allah be pleased with him). Only a short report was published on the Jalsa Salana for women: “This time the attendance of women exceeded that of the previous year and their Jalsa progressed in an excellent manner and was consistent.”
By the grace of Almighty Allah, this year marks the 49th Jalsa Salana UK. However, for the Ladies, it will be the 44th Jalsa!!  It was in 1971 that members of the Lajna Imaillah had the chance to hold their own separate Jalsa. According to the instructions of Imam Bashir Rafiq Sahib, two meetings of the Majlis-e-Amila were held to make the necessary arrangements for Jalsa. Members were also invited for consultations and duties were allocated to Lajna and Nasirat. The Jalsa commenced at 9.30 a.m. with the recitation of the Holy Qur’an by Respected Ataul Mujeeb Rashed Sahib. Imam Sahib then requested Sir Chaudhry Muhammad Zafrullah Khan Sahib to inaugurate the Jalsa, after which the Lajna sessions commenced.
The First session was presided by Mrs Nasira Nadeem Sahiba and Mrs Bahri Hameed Sahiba presided the second session. Members of the press were invited by the press secretary and in response to his invitation, a lady reporter from the ‘Wimbledon News’ attended one session of Jalsa. At the end of the session she interviewed Mrs Salima Nazir Ahmad Sahiba, General Secretary Lajna. A report of the Jalsa was published in the issue of 10th September, 1971. Similar reports were published in six other papers of this group. Many other weekly English and Urdu papers, including the Daily Times, London, covered this news item. More than 500 ladies attended the Jalsa. Members travelled from all over the country including Birmingham, Huddersfield, Gillingham, Hull, High Wycombe, Southall, Coventry, Oxford, Cambridge, Leeds, Bristol and Glasgow. Many non-Ahmadi and European guests also attended the Jalsa.
Look at the humble beginnings from which we have blossomed!  It is absolutely amazing the leaps and bounds that the Lajna have achieved regarding this special annual event. The speeches are of the utmost importance and delivered with poise and persuasion, full of wisdom and grace.  The humble beginnings of one or two ladies bearing the burden of cooking for hundreds of people has turned into a well-oiled machine. These ladies, and all volunteers of Jalsa Salana, anywhere in the world, deserve our utmost love and respect, and most of all our prayers.
May Allah the Almighty safe-guard and protect all who strive in his cause. Ameen.