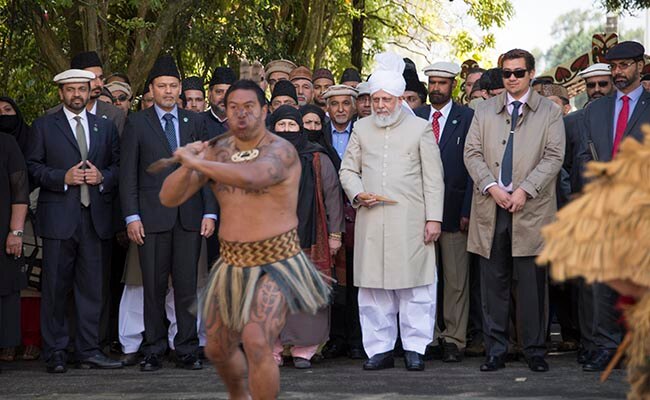 The Maori people are famous the world over for their dramatic cultural displays (surely you’re familliar with the All Blacks pre match tradition). So when the hallowed ground of Turangawaewae in Ngaruawahia was blessed with the presence of Hazrat Khalifatul Masih V, Hazrat Mirza Masroor Ahmad (aba) the atmosphere was  electric!

The Khalifa of Islam was welcomed by the Maori King, His Majesty Tuheitia Paki to his tribal area and village. The event celebrated the arrival of our dear Khalifa to New Zealand as well as the completion of the Maori translation of the Holy Quran.

Warriors charge! All visitors are challenged.

The welcoming ceremony began traditionally with a Maori warrior checking to see if the visitors had come in peace or if they had aggressive intentions. The Maori warrior then led Huzoor (aba) and his entourage to the Marae, or traditional Maori meeting place.

The traditions of the native Maori people revolve around the village community and everyone is included in the upkeep and maintenance of the land and its inhabitants. Children play a major role in this and rather like the Nasirat and Atfal of the Ahmadiyya Muslims community, are trained to carry out duties of their own from an early age. In the image below the Maori children are singing a welcome song in their native tongue. Singing makes up a large part of the Maori culture.

Children sing and perform the Haka for guests

Jama’at members were seated on one side of the meeting area while the king and his people were sat on the opposite side. Huzoor (aba) was honoured by the Maori by being seated at the head of the congregation. As people settled, a Maori elder rose and began addressing the congregation in the native Maori tongue. He spoke on behalf of the tribe and detailed the struggles and hardship of the Maori who, through the late 1800’s, faced land confiscation and the abuse of their human rights by European settlers.

King Tuheita Paki and his Queen

It was for this reason that the King movement was established in 1850, so that Maori could work on an equal footing with the settlers, who at the time were growing in number. However this was seen as a challenge to the supremacy of Queen Victoria  and the British monarchy by the colonial government. This led to the 1863 invasion of Waikato. Following their defeat at Orakau in 1864, the King’s forces withdrew into dense forest in an area of the North Island that became known as the King Country.

Maori elders sat on one side while the guests sat on the other side, according to Marae tradition

In his address the elder praised Ahmadi Muslims for their love of mankind. He said they welcomed Khalifatul Masih V (aba). After he spoke, a large contingent of the tribe stood and began singing as is their tradition by way of indicating support for the words spoken by the Maori elder. Alhamdolillah!

After a brief introduction Mr Shakil Munir, who undertook the project of the Maori translation of the Holy Qur’an, replied on behalf of the Ahmadis. He began with the recitation of the opening verses of Surah Fatiha along with the Maori translation.. Originally from Pakistan, Mr Munir lived in Ghana for much of his life and took the time to learn the Maori language initially through a Maori dictionary and phrase book. The project ultimately took more than 25 years to complete and culminated into this divinely guided event, Alhamdolillah.

Mr Shakil then spoke about the etiquettes of handling the Holy Qur’an saying “We show respect to the word of God whenever we hold it in our hands.” In response the Ahmadis present then sang with a few verses of Hai Daste Qibla Numa.

Alhmadolillah! Words cannot adequately described how we felt at this historic moment – when  for the first time, the Kalima was recited to the Maori people in the presence of the Khalifa of the age.

After an exchange of gifts, Huzoor (aba) and His Majesty met privately  while the rest of the Jama’at had the opportunity to meet the Maori community. This was initiated through Hongi which is the touching of two noses, a traditional Maori greeting. The significance of this gesture is that the ‘ha’, or breath of life, is exchanged and intermingled, which can also be interpreted as the sharing of both party’s souls. This signified that the members of the Jama’at were no longer guests, but had now become one of their people of the land.

The traditional Maori greeting by touching of the noses and the forehead: The Hongi

Once Maori and Ahmadi were accepted as one people, the National President Mohammad Iqbal invited the community to join us for our Jalsa Salana and visit our new mosque Baitul Muqeet. This was followed by the presentation of the very first completed Maori translation of the Holy Qur’an by Hazoor to the King.

All guests then followed Huzoor in silent prayers where we prayed that that this new friendship that would continue to grow, Insha’Allah.

Another 5 ways to recreate the Jalsa experience at home! 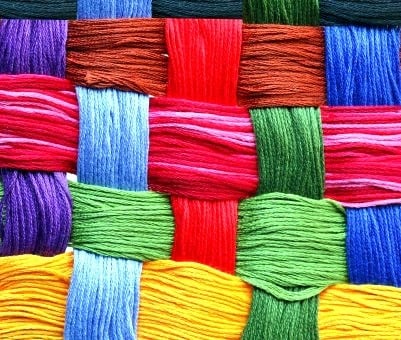 The Thread That Binds Us All