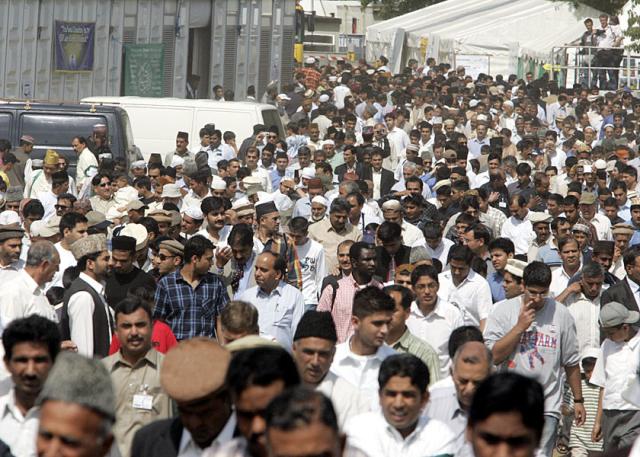 It was said “Islamabad is too big.”

The two gigantic fields, the basketball court with the vast amount of space available around Islamabad was more than enough for Jalsa Salana.  After all how many people would come?

Being raised as a kid in Islamabad, Jalsa Salana was the highlight of the year. We would see Eastern European men of huge stature pitching up gigantic marquees and fork lifts, tractors and Lorries would flood the roads with mountains of sugar, oil, meat, drinks, rice and potatoes.

Coming back from school it was difficult to recognise my own home!

I would ride my bicycle whilst observing Islamabad, a small area in the historical village of Tilford, being completely transformed for an international spiritual gathering. Daily,  swarms of cars, buses and people would enter through the narrow gates of Islamabad.  I would see all sorts of unfamiliar number plates, unfamiliar faces,  unfamiliar outfits and would hear very unfamiliar languages however; there was a very familiar sense of unity.

Guests arrive at Islamabad. Our first glimpses of the diversity of Ahmadiyyat.

I was somehow amongst family.

Year after year, I would return from school and find even larger marquees, bigger bundles of food and an increasing number of tractors and fork lifts. I would meet fascinating people from America , Europe, Asia , Russia, Africa and Australia and they would increase in number every year.

The Promised Messiah’s guests would fill up my house. At times, I would even discover people lying on my kitchen floor! Tents would cover every blade of grass in Islamabad and I sometimes found myself waking up on my staircase.  But somehow my respect and love for these guests would grow every year.

The bazaars were extended and the aroma of samosas and fried chicken became increasingly apparent.

It was clear, Islamabad was too small.

In fact, Islamabad just could not accommodate Jalsa Salana it had grown too big too fast. A desperate need to hire and rent fields surrounding Islamabad was felt, but year by year the body of people grew bigger and larger.

2004, last Jalsa at Islamabad. There were almost as many people outside as inside the marquee

The blessings of the Promised Messiah (May peace be upon him) were expressing themselves, from the first Jalsa in Qadian of only 70 people to tens of thousands overflowing 23 acres in the south of England.

Jalsa Salana has now disappeared from Islamabad, leaving its streets barren and empty creating a gap in my heart and a longing for that atmosphere is all that remains.

We will miss you elongated Naan! New machinery at Hadeeqatul Mahdi means we will get round naan… would it be the same?