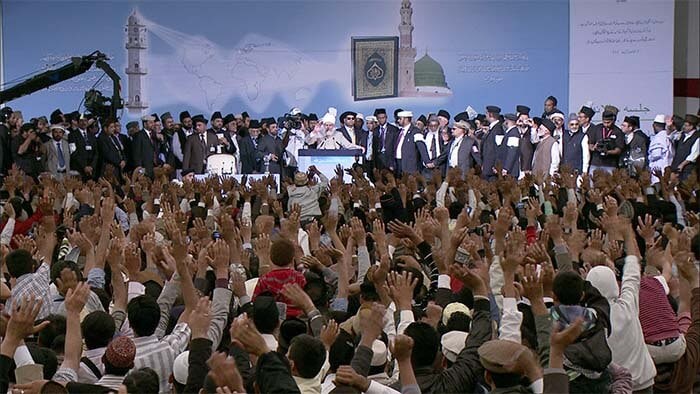 The Promised Messiah (as) used to narrate the story of two pigeons to Hadhrat Amman Jaan (ra). He would lovingly relate that once a traveller got stuck in the middle of a jungle and took refuge under a tree. It was in this instant that the two pigeons that lived in the tree realized that they had a guest joining them. Seeing that the traveller was cold, they decided that because he was their guest, they would drop their nest down to the traveller so that he could build a fire and keep warm. They did so and the traveller built a fire and was then satiated in warmth. Some time passed, and the birds saw that the traveller had grown hungry, so they decided that they would throw themselves into the fire so that he could consume them, and so fulfil their duties to their guest. They then threw themselves in.

The Jalsa Salana is an event that I never could wait to attend. It was a time in which I would meet friends and family from all across the world, some of which I couldn’t meet during the year, and would humbly participate in my Jalsa duties, sometimes serving water, while I would feel my inner self being soaked with contentment and satisfaction which to many is impossible to find in the modern world. It would often happen that I would leave Jalsa with a void and sadness in my heart, anxiously waiting for the next Jalsa to arrive.

The theme of this year’s annual convention is as The Promised Messiah (as) describes as proclaiming the bounties of Allah the Exalted. Jalsa Salana is a landmark opportunity in which one- whether he is Ahmadi or not- becomes witness to the blessings that God Almighty has bestowed upon the jamaat. It becomes imperative that we be even more humble in our prayers, and supplicate that Allah may continue to tend the tree of Ahmadiyyat towards the supreme victory. God Almighty tells us in The Holy Quran (14:8) that “if you are grateful, I shall increase you”. In the ongoing preparation for Jalsa, our biggest preparation is that we continuously pray for the success of this event. Our tears must proclaim our thanks in being the chosen community of The Almighty. It is a time where we must be most hospitable to all. All men and women, whether they be from Mauritius, or Russia, America or China, will participate in a convention that is not an ordinary convention, but one with divine promise of help.

In the early days of Ahmadiyyat, many people started coming to The Promised Messiah (as), and the occurrence of the people became so strong that there came a time that The Promised Messiah (as) started to feel overwhelmed. It was then that The Promised Messiah (as) was revealed by God, that ‘Waseh Makanaka’, meaning widen your house. We must do the same, and broaden the scopes of our hearts and pour ourselves into sacrifice and the love of one God rejuvenating ourselves and refreshing our faith. We must drink from the fountain of the love of Allah, and always remember that we were the ones chosen lovingly as a Jamaat, and strive to be the chosen people of Allah always striving to strengthen the bond of brotherhood.