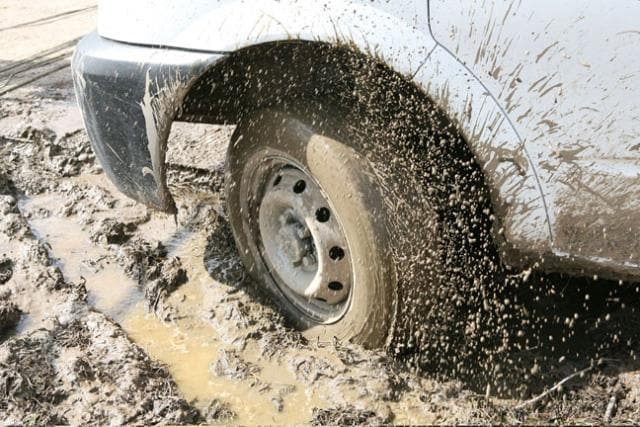 When we hear the words ‘British weather’, a hot, sunny, Mediterranean day doesn’t often come to mind now  does it! So in 2007, the Jalsa salana was a testing time not only for Jamaat Ahmadiyya UK, but for  the whole country.

As far as I can remember, it was a dark and gloomy Friday morning, one week prior to Jalsa. Around 10 am in the morning, thunderclaps started to echo in the hallways of Jamia during our annual Urdu exams. Before we knew it, thuds of rain could be heard pounding the roof of the building, vigorously… This continued for sometime. It was heavy rain like never  before. Later in the afternoon as we departed to attend Huzoor’s Friday sermon at Baitul Futuh, we could see the destruction that had been caused by the floods. The drainage systems were struggling because they couldn’t funnel the large volumes of rain water. Around £6 billion in damages were reported, and the average rainfall across the country was 140 millimetres more than double the June average. May to July were infact, the wettest months on record since 1776.

While London itself seemed to recover quite well,  it was a different story at  Hadeeqatual Mahdi (Oakland Farm) This  was now the new location  of the Jalsa salana. The field that to be home to an event which would cater to 25 000 plus people, had now become a mud fest.

Being a farm land, Hadeeqatul Mahdi grounds became mud instead of grass

With one  week to go to Jalsa, all the arrangements were place and, guests had  started to arrive. The organisers knew that this Jalsa was not going to be your typical, well managed event by a long shot. With  the prayers and guiadence of Huzoor, the UK Jamaat buckled down  for a challenge that they knew was going to test them to the limits.

Just finding a pair of wellington boots was a headache those days, as shops had run out of their stock. People arrived to Jalsa a lot later than they would have liked due to huge traffic jams, created  because cars were getting stuck in the muddy fields of the Jalsa site. A major motorway to the jalsa site, the M25,  was jammed.

On Friday, the first day of the jalsa,  many  guests had to follow the Juma prayers in their cars because they couldn’t make it in time. As a result the organisers decided  to prevent any  cars belonging  to non duty members  on the Jalsa site, and parking arrangements  made at Islamabad at the jamaat’s Tilford site.

Nearly every department was affected by the rain that jalsa and their workload multiplied,especially that of the  hygiene department!

The metal tracks laid were a blessing

However in spite of these seemingly insurmountable difficulties, by The Grace of God, we overcame the challenges. Huzoor graciously commended the work and efforts of the UK jamaat who worked relentlessly  to ensure that the jalsa could go ahead as planned. I understand that Ameer sahib UK made sure that all available steel make shift road tracks are hired from across the UK, demonstrating the extent of the dedication and the importance given to this event.

Rain or shine, Khuddam are always ready to take on any challenge

That jalsa was for me, proof that this  Jamaat is more than capable to handle any challenge it faces, no matter how big, because of the blessings of Allah and the prayers of his beloved Khalifa, our spiritual Imam Hadhrat Mirza Masroor Ahmad (ABA).

Were you there for the 2007 Jalsa? What have been your biggest challenges for Jalsa? Let us know in the comments below. 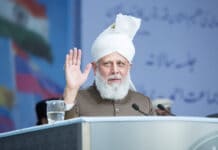 The Address to Women