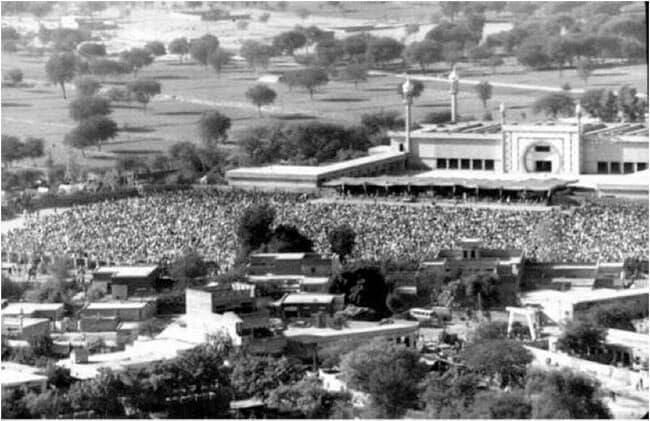 by Saira Nizami and Kaleem Ahmad

Given that we don’t have massive Rabwah Jalsas anymore, I wondered how they would have been and what preparations would have been made for them. To find some answers, I asked my mother, Syeda Bushra Nizami Sahiba, to share her experience:

Travel: “I was very young when there were Jalsas. We would start our journey from Sindh, Hyderbad, by Chenab Express – a 24-hour travel. It would start at 11 p.m. For example, we would leave on the 24th, arrive at Rabwah on the 25th and the Jalsa would begin on 26th December. Excited, we would look outside the windows at each stop to see where we are and would see travellers scurrying with their luggage. I enjoyed watching Multan’s greenery from the window; it was breath-taking. At Chiniot’s Station we would become aware that our station is about to come.”

Jalsa attendees arrive at a then barren Rabwah

Living Arrangements: “Guests would either stay at someone’s house or there were arrangements made at the Jalsa Gah for them to stay . We used to stay at sahabi Mufti Muhammad Sadiq’s house. We used to take our own bedding with us and we also took a small stove and condensed milk for tea to cope in  the chilly weather. Once we stayed at a college and there was one huge bathroom with many taps for wudhu and separate shower stalls. As different families would stay with us we got to know many different people  and these Jalsas binded us.”

Rabwah appeared a complete wasteland in its early days. Some of our grandparents lived in these tents and mud houses.

Langar khana: “The hosts would tell beforehand how many guests were staying at their homes. The Khuddam would distribute food quickly in the morning carrying buckets of daal /salan gosht and roti, 3 times a day. For patients they would provide  rice once a day for them. Hosts used to receive the food in their own vessels. At times the lady of the house would also prepare their own food, or condiments like achaar in order to be hospitable.”

An early Jalsa kitchen under the open air.

Weather & Distance: “As Jalsa’s would be held in the winter season, our hands would freeze in the morning with the water for ablution; our fingers would lose their sense. There was immense cold so much so that the water would chill into ice overnight. By the evening at 7 pm it would become really dark, so we would all carry lanterns to find  our way. The Jalsa gah was far away, so our brothers would walk and women would use carriage rides.”

Crowds were in their hundreds of thousands. Can you imagine 250,000 Ahmadi Muslims around you?

Other arrangements: “Temporary bathrooms would be made by digging deep holes in the ground, and after the Jalsa was over those holes would be filled with the sand. Arrangements became better as the Jamaat was able to afford more. Taleemul Islam college was well-known and its hostels had good arrangement and  facilities for Jalsa guests.

It was the time of Hadhrat Musleh Maud (ra), and at the end of each Jalsa, Huzoor would pray that all travel safely, and that all the sacrifices made would be blessed. Indeed, those were golden times and the special memories of Rabwah Jalsas are unforgettable.”

The last Jalsa in Rabwah

Present day Rabwah. A barren desert converted by Allah’s grace into an Oasis of spiritual riches. Can you believe this was once a barren patch of dirt?

Hundreds of thousands amidst the dirt await the arrival of their leader. A voice cries out which grows into a deafening roar of Naaray Takbeer. The electrifying atmosphere with thousands of voices echoing in unison; signaling the arrival of Khaliftul Masih, the Jalsa had begun.

A mere sight of beloved Imam, and things were spiritually on a roll for all the breathless souls attending the blessed convention. That one glimpse would act as a killer of the tiredness, iciness and weariness of hours and even days of traveling at a time when private conveyance was a rare sight.

Jalsa in the shade of the mountain. The mosque is the Aqsa Mosque in Rabwah. Sadly, Ahmadi Muslims can’t even call it a mosque because of unjust government laws. They can’t even call their city Rabwah.

The faith rejuvenating and inspiring speeches by Khalifa of Islam right in the front of Masjid Aqsa in a yellowish green tent had wondrous power, ample enough to elevate one’s wisdom about the innumerous bounties of the Merciful Lord, His Holy and Exalted Blessings and those elapsed through His most loveable creation Muhammad (SAW) upon the Muslim Ummah.  These addresses of Hadhrat Khalifatul Massih were the corner stone in reaffirming faith of individuals and a shift in the barricade persuading them to strive for better and thus best in all codes of life.

Apart from the faithful addresses of Khalifatul Masih, highlights of Jalsa Salana Rabwah included the Nazms recited by Chaudhary Shabbir Ahmad Sahib and Saqib Zeervi Sahib. With each year Zeervi sb coming up with a nazm of his own, a new wave of spiritual charge would run among the attendees, who couldn’t control their emotions by praising their bountiful lord; raising ever earsplitting slogans than before.

Jalsa guests walking from the train station to the Jalsa site.

When it came to honoring the guest of Promised Messiah (A.S), serving savory and plenteous supply of Langar was the advice given to Nazim Ziafat by Khalifatul Masih. By the time of last Jalsa in Rabwah of 1983, the then state of the art roti plant capable of facilitating over 250,000 people was installed. This fully functional plant was the main source of providing delicious rotis to the attendees of the divine convention throughout the Jalsa period.

No golf buggies, taxis or trucks. Most people arriving for Jalsa simply packed everything in a bundle and carried it on their heads.

With as many as three decades passed without a single mark of a Jalsa Salana in Rabwah, the thrilling Jalsa atmosphere may seem physically omitted from the Pakistani soil but with continuous supplications to our Master who is All Hearing and the Possessor of All Powers, that day will be inching closer when Pakistan will once again rejuvenate from the fortune of Jalsa Salana Rabwah.

Note from Editor: I was 14 when I went to Rabwah and I spent two and a half years there; the best years of my life. I regret not knowing then to climb a nearby mountain on a Friday and simply capturing the scene of an entire city empty, the shops closed and homes locked. Every person would be in the main Aqsa Mosque attending the Friday Sermon. Then as it finished, the main Aqsa Road and all others leading away from Aqsa Roundabout would be carpeted with thousands of people. A neat file of Atfal would be in the middle, separating the men on one side and the women on the other. I think of this and imagine how epic it would have been to be among 250,000 Ahmadi Muslims in the same place! Sadly, Ahmadi Muslims can not do Jummah at Aqsa Mosque anymore due to intense persecution and those scenes are gone. Every year Jamaa’t makes preparations for Jalsa in Rabwah, the new Jalsa site sits ready and more than a dozen Langar’s have been prepared for the guests. While attending and watching this Jalsa, please remember the strong hearted Ahmadi Muslims of Pakistan and Rabwah in your prayers. 250,000 attended the last Rabwah Jalsa in 1983. If a Jalsa was to happen in Rabwah now, just imagine how many would attend….

The new Jalsa site awaits for the arrival of Hazrat Khalifatul Masih and his followers. Inshallah!