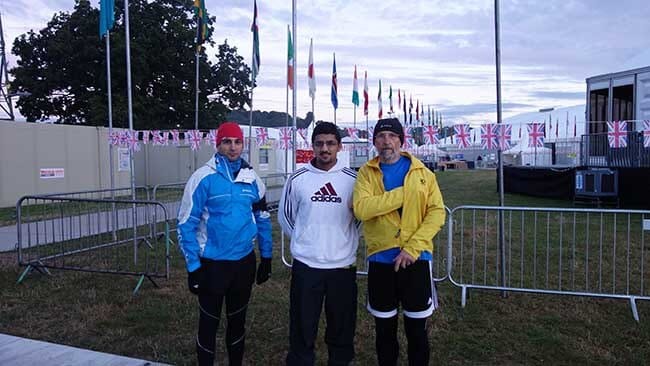 Jalsa Salana kicked off this morning with Tahajjud prayers starting at 4:00am, followed by Fajr. While many guests returned to their accommodation, to catch some more ‘snooze’ time, before getting ready for Juma prayers, others decided to go for morning walks accompanied by a cup of tea from the tea stall. Some of the more health conscious adventurers (Amir Sahib, Germany, who regularly does ‘Iron Man’ challenges) decided instead to venture out for a 15km run!

Seeing an opportunity for another blog , the Jalsa Connect team decided to join him  and his son on their  morning run and discuss the importance and benefits of Jalsa Salana.

Ameer Sahib Germany and his son off for a morning run!

As we negotiated the forest trails through the mist surrounding Hadeeqatul Mahdi, Amir Sahib recounted his earlier days as a Jalsa attendee.

“I have been attending Jalsa (in the UK) since 1977. At that time we used to have it in a local park in London… this became too small and then Islamabad was bought when Khalifatul Masih 4th (rh) arrived… Islamabad was truly beautiful…”

We had hit the half mile mark and sweat had started to break when Amir Sahib told me,

“Jalsa is like energy… it provides [spiritual] energy for the rest of the year.. It makes you realise where you are standing. It gives you time to reflect how your relation with Allah has developed… Jalsa is a place where so many people come together for the sake of Allah. It’s clear from Hadith that those who assemble to remember Allah are shielded by angels”.

We had hit the 10km mark, the birds were cheeping, the mist had disappeared and our pace had slightly dropped.

As we ran, Amir sahib constantly emphasised the importance of listening to the Jalsa speeches.

“If you are not listening to the speeches during Jalsa, then you are missing out on a lot of blessings.”

With only a few miles left and my legs giving in, Amir Sahib explained why he thought running was so important.

“ …You need to be alone for a special period… being alone helps one to reflect and there’s no better way than running… I do my duas whilst running. I have set prayers, running is a great way to do Zikr.”

As our run came to an end, Amir sahib gave his advice to young people attending Jalsa Salana.

“ ..You should pray and worship Allah [during Jalsa] and listen to the speeches”.

He also gave a health tip.

“Don’t drink coke, unless you get really tired and need energy …”

An early morning run with Amir sahib gave us an insight into the development and significance of Jalsa Salana, and how by The Grace of Allah, we have moved on from hiring out local parks in London, to erecting the largest marquee available in Europe for the Jalsa Gah alone.

May Allah enable us all to realise the true purpose of this Jalsa- advancing in our spirituality. Ameen.