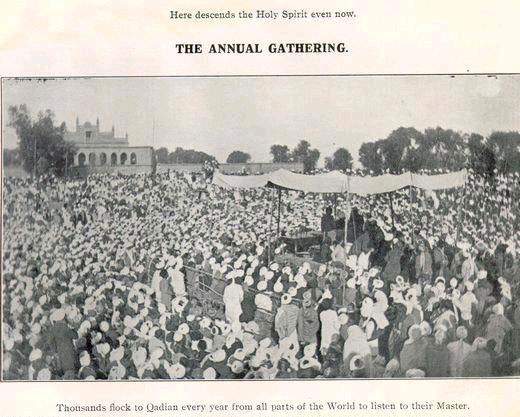 From a mere attendance of 75 at the first ever Jalsa in Qadian to the unparalleled turnout of more than 30,000 in current years in the UK; the convention of Jalsa Salana has exceeded all expectations and achieved unbeatable milestones in the past 125 years. This tremendous progress is truly the product of the divine help from Allah the almighty and the bountiful blessings of Khilafat. Today many of us are accustomed to the various Jalsas that take place around the world but let us take a journey back to where it all began.

In May 1891 in a remote and unknown town in India called Qadian, under Divine inspiration Hazrat Mirza Ghulam Ahmad (as) announced that he was the Promised Messiah and Imam Mahdi awaited by all Muslims. Later on the same year the Promised Messiah (as) decided to hold the first Jalsa Salana and from then on the divine conventions of Jalsa Salana’s began. The Promised Messiah stated in Asmani Faisla that “The major aim of this gathering is that the sincere members of the Jama’at should be able to derive religious benefits and at the same time they should acquire more knowledge and advance in their God realization.” The first Jalsa Salana in 1891 was attended by 75 individuals, and eventually throughout the years, Jalsas progressively grew and began attracting large crowds from across all parts of India and Southern Asia. Following the independence of Pakistan in 1947, the majority of Ahmadi Muslims migrated, establishing Rabwah Pakistan as the new headquarters of the community. The last Jalsa before the partition in Qadian in 1946 saw a crowd of nearly 40,000 faithful attendees.

After the partition, the community grew in size and number and Jalsa Salanas continued to be held in the town of Rabwah. These steadily increased in size and influence as even more Ahmadi Muslims gathered with the shared purpose to enhance their spiritual knowledge and to reaffirm their dedication to their Khalifa. In 1984, Ordinance XX was introduced by the government of Pakistan which denied Ahmadi Muslims the right to practice their faith. Due to these circumstances, the fourth Khalifa Hazrat Mirza Tahir Ahmad (ra) left Pakistan and migrated to the United Kingdom, moving the headquarters to Fazl Mosque London. The last Jalsa Salana held in Rabwah, in 1983, saw nearly 250,000 faithful Ahmadi Muslims attending and seeing one last time the

face of their Khalifa in Pakistan.

Meanwhile, under the guidance of Khilafat the community was spreading across the world. Countries such as Ghana, Nigeria, Germany, Switzerland, Canada, United States of America, Fiji, Bangaldesh, Australia, Singapore and many more held their own separate Jalsas and are continuing to do so every year.

Among the many countries the message of Ahmadiyyat spread to, the United Kingdom was also one. The first Jalsa Salana took place in 1964 and was held in Fazal mosque with just a few people. From venues such as the Wandsworth Town hall to Robin Hood Roundabout in Roehampton, the attendees of Jalsa UK speedily increased requiring larger spaces for the gatherings to take place. On the 30th April 1984 with the arrival of Khilafat, a new era dawned upon the UK community. That year Jalsa Salana took place with the concluding address of Hazrat Khalifatul Masih held in Tolworth recreational hall in the presence of about 2500-3000 people. Soon with the guidance of the Khalifa, the UK Jama’at progressed increasingly and the Islamabad site was purchased with the Jalsa in April 1985 taking place in two marquees to accommodate the 5000 attendees. Throughout the years, vast improvements to the arrangements, facilities, and infrastructure were carried out, the addresses of the Jalsas being translated into many languages and sent across the world. Eventually with around 11000- 12000 attendees, even Islamabad’s large grounds became too small for the growing community and so under the direction of the fifth Khalifa, Hazrat Mirza Masroor Ahmad (aba), Hadeeqatul Mahdi in Hampshire Alton was purchased in 2006. Today Jalsa Salana UK, held every year in Hadeeqatul Mahdi is the largest and longest standing annual Muslim convention in the UK, it is attended by more than 30,000, with

guests from more than 97 countries.

Indeed it is evident that the renaissance of Islam that took place at the hands of the Promised Messiah, by the blessings of Allah has thrived fruitfully with one proof being the progressive evolution of the divine convention of Jalsa and let us pray that it continues to do so. Ameen