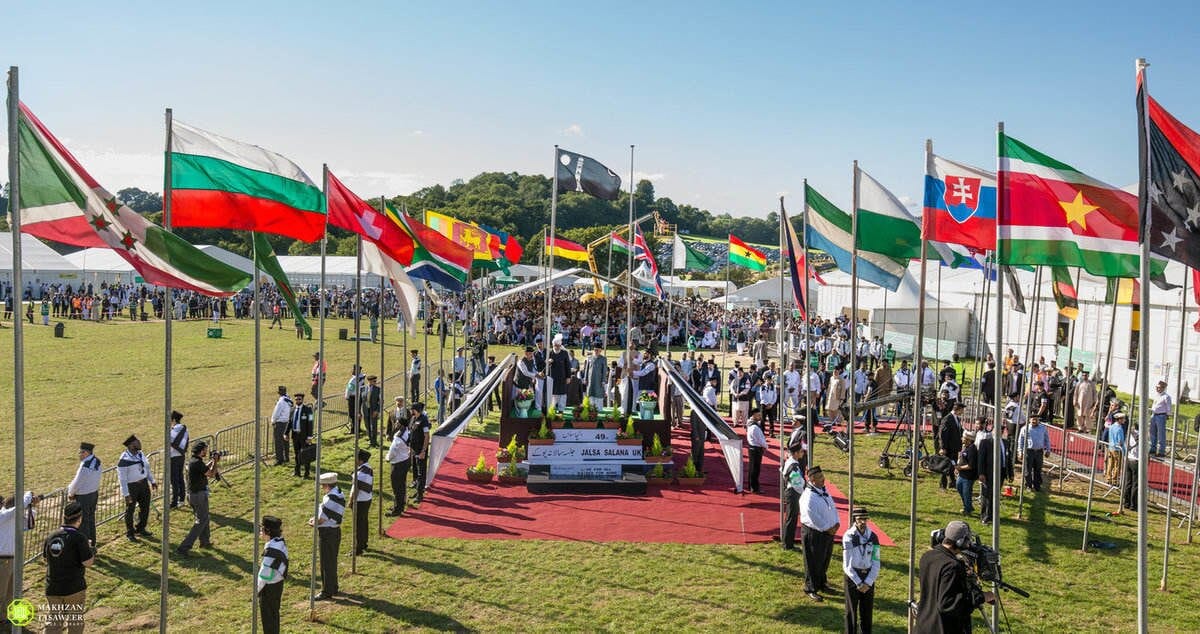 The 50th UK Jalsa Salana is fast approaching with less than 3 days until the beginning of the blessed proceedings. With a milestone such as this one just around the corner, it’s time we take a small trip down memory lane and revisit how the UK Jalsa has transformed over the years and grown from a small event attended by a few to an enormous convention hosting over 30000 people and delegates from 96 countries. Jalsa Connect looks back at some of the most significant Jalsa Salanas in the history of the UK Jamaat.

The historic first UK Jalsa Salana was held 52 years ago, in 1964 at the iconic Fazl Mosque in Southfields, London. Held on the 29th and 30th of August with only a few participants, it was a significant milestone as it laid the foundations for where the Jalsa is today. It was the first of many many more Jalsas to come and many blessings to follow.

The international flagship Jalsa Salana had traditionally been held in Rabwah since the partition of India and Pakistan. However, after the passing of the infamous Ordinance XX in Pakistan, which forbade Ahmadi Muslims from practicing their faith, it became impossible for the Khalifa to reside in Pakistan and he was forced to migrate to the UK. The story of his migration is one of the most remarkable chapters in the history of the Community – the manner of the Khalifa’s departure from Pakistan right under the clutches of a military dictator with all the worldly might at his disposal demonstrated the succor which Allah gives to the Community. His first Jalsa Salana was held only a few months after his arrival, and was a tremendously significant event-a separate venue had to be booked for Hadhrat Khalifatul Masih IV (ra)’s concluding address as the London Mosque was unable to cater for the sheer number of people that attended. He delivered a powerful, awe-inspiring address to a packed venue of Ahmadi Muslims and re-inspired the Jamaat with the faith that the blessings of Allah were still with them, and that the Jalsa would grow larger and larger, fulfilling the Holy Prophet (PBUH)’s prophecy that during the latter days “the sun will rise from the West”. To this day the Jalsa continues to grow, ever fulfilling this prophecy and inspiring our community.

As foretold, the Jalsa Salana saw tremendous progress. It was said “Islamabad is too big.”, a brother wrote about Islamabad, a tremendous gift from Allah the Almighty. “The two gigantic fields, the basketball court with the vast amount of space available around Islamabad was more than enough for Jalsa Salana.  After all, how many people would come?”. That was the thought of many Ahmadis at the time, when the Jamaat purchased the 25 acres of land that is Islamabad in Tilford, Surrey to host the international flagship Jalsa Salana. Formerly a boarding school that housed evacuees during World War 2, it served as a permanent home for the Jalsa Salana until 2004. For this momentous first Jalsa Salana at Islamabad, the Jamaat overcame numerous administrative, infrastructure and financial challenges that came with managing a venue of this size, and hosting over 5000 people – even overcoming the challenge of bad weather on the day, with Khuddam picking up cars that were stuck in thick mud, and getting them safely on the road. My grandfather, who attended the first Jalsa at Islamabad, tells me that Khalifatul Masih IV (ra) took him to see Islamabad, and they marveled at the sheer size and grandeur of the grounds that had been purchased for this blessed occasion, and at the time it was incomprehensible that these grounds would ever be filled. Now, in hindsight, we wonder how it was ever possible for us to host such a large and ever-expanding convention at Islamabad – a manifestation of Allah’s blessings and the fulfillment of prophecies.

Communication was often a large challenge at the Jalsa Salana- relaying the message of the Khalifa and the distribution of his Friday Sermons and Jalsa addresses, for a long time, was done through the difficult task of taping his sermons, and then duplicating them to be sent across the globe. In 1992 when MTA was established by the grace of Allah, the Jalsa Salana of that year was broadcast across Europe live – an achievement that had never been accomplished before. This milestone set the benchmark for years of progression in the international coverage of the Jalsa Salana and in 1994, MTA broadcast the Jalsa across the world for the first time. The widespread availability of MTA was a dream come true for many who had never before seen an international Jalsa taking place. For people in rural areas, “merely seeing the Khalifa on the screen easily quenched one’s quest for a connection”, and MTA allowed this to be fulfilled. The International Jalsa Salana is a phenomenon to members around the globe and MTA allows people all over the world to experience these blessings in their homes. “How amazing that we are connecting with people from nations all over the world. Has such an event ever occurred in the world before?” said Khalifatul Masih IV (ra)  at the 1994 Jalsa. Such an event had never occurred in the world before, and this Jalsa was a landmark one for the UK community – it was the fulfillment of another prophecy of the Promised Messiah (as), that his message will reach the corners of the earth.