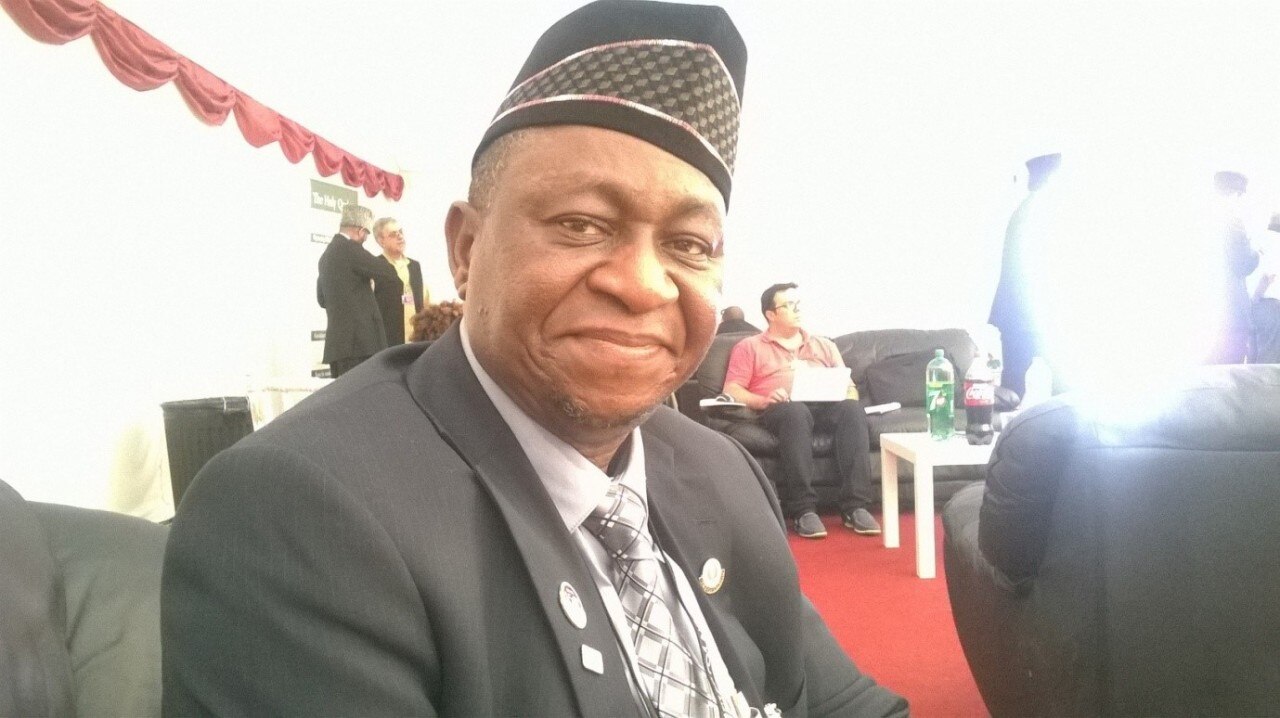 Earlier, JalsaConnect noticed a rather splendid-looking chap sat on the sofa. Upon closer inspection of his badge, JalsaConnect saw it was Dr Ghani Enahoro, the Naib Amir of Nigeria!  JalsaConnect asked permission – which was granted with a beaming smile – to sit down for a little chat.

JC: How are you today?

JC: How has your experience of the Jalsa been so far?

DE: It’s been quite exciting. The standard is good; the hospitality is great. The standard of the Jamaat is best represented here. I was at the US Jalsa a week ago – it was very good too, Mashallah.

JC: Alhamdulillah. Can you tell us what your feelings are about Jalsa?

DE: Jalsa is a special programme – whoever attends it will never be the same again. One changes oneself, one becomes more educated about the principles of the Ahmadiyya Jamaat, such that he will never be the same again. There is no other gathering I know of, apart from Hajj – I went a few years ago – that’s like this. It’s exciting and it’s the promise of the Imam Mahdi (as). I’m very proud of it.

JC: Did you hear Huzur’s address yesterday and today?

JC: And how did you find them?

DE: They’re very well-researched. You know, Huzur doesn’t just talk – he speaks with the guidance of Almighty Allah. The speeches have been very targeted, addressing peace in the world, and asking us as Jamaat members to be standard-bearers. We need to be good ambassadors of the Imam Mahdi (as) and we must present pure Islam before the world.

JC: Especially today, Huzur’s speech (Huzur’s address to the Lajna on Saturday) was very relevant to the problems of today’s society.

DE: It was very good. As the Holy Prophet Muhammad (saw) said: ‘Paradise lies under the feet of the mothers.’ Huzur has re-iterated that message. Also, he said that they should be very careful. They should be very mindful of how children are brought up, and he has guided them regarding Purdah (veiling), and the abuses related to its absence. But also that, if there isn’t modesty, but there is Purdah, then Purdah becomes useless. Beautiful speech.

DE: I’d like to continue to tell Jamaat members to be ambassadors wherever they are. By our attitudes and actions, Inshallah, we can change the world, we can bring peace to the world. And to pray that Allah continues to strengthen Khilafat.

JC: Inshallah. Jazakallah and thanks for your time.