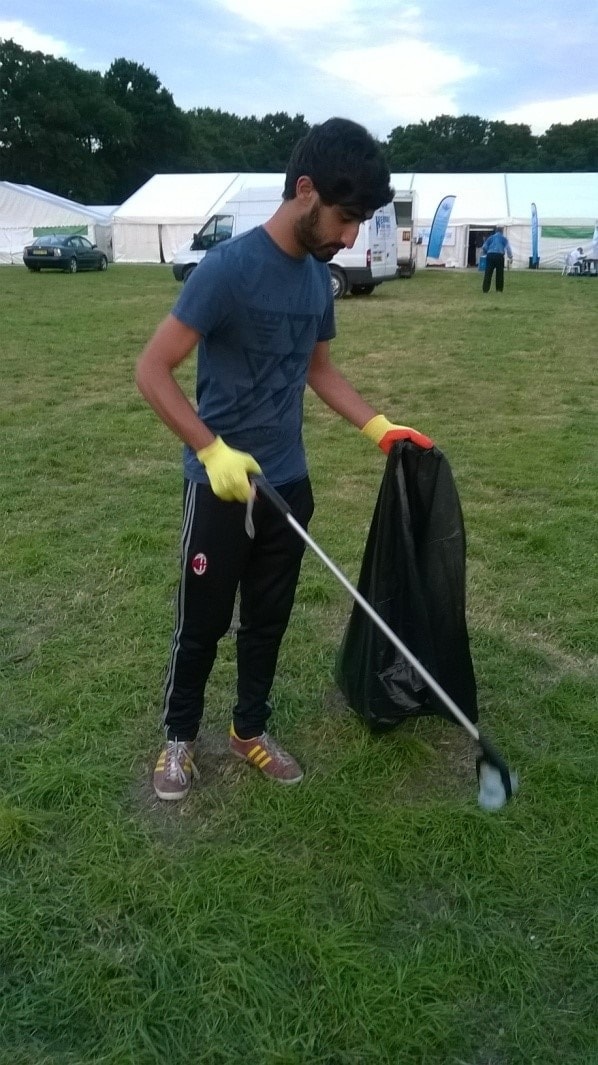 Hazrat Abu Malik Al-Ash’ari narrates that they Holy Prophet Muhammad (saw) said: ‘Cleanliness is half of faith…’ (Sahih Muslim) The Jalsa Hygiene guys are the true Jalsa heroes. They’re out all hours, cleaning our toilets, emptying bins, removing black bags and clearing up litter. Imagine how much of a mess Jalsa Salana would be without them! JalsaConnect was walking along and saw two Hygiene guys having just finished cleaning the toilets. JalsaConnect asked for directions to the Hygiene base, where JalsaConnect learnt more about the great job these guys do… JalsaConnect was speaking to Aneel Tahir.     JalsaConnect: Assalamu Alaikum. Aneel Tahir: Wa Alaikumussalam. JC: You work in Hygiene. In a Hadith, the Prophet Muhammad (saw) says that cleanliness is half of faith. On top of that, you’re cleaning at the gathering of the Promised Messiah (as), for the guests of the Promised Messiah (as) – it’s a really big job. AT: Yeah – it’s a big task. It’s a massive site as well. We’re in charge of not only the rubbish, but also cleaning the toilets as well. The priority is to ensure that the site and toilets are always clean, so that the guests can have a good experience of the Jalsa. AT: When we arrived on Thursday, we brought some stock with us, from East London. The first task, initially, is to spread out the bins and make sure most of the areas have enough bins so that we can keep the site relatively clean. After that, the toilets need to be seen to. That’s making sure sinks are clean, toilets are clean, floors are clean and that they have the necessary supplies. On Friday, when Jalsa starts, it’s all about getting on the truck and picking up rubbish, which is pretty much constant and happens throughout Jalsa. Those are the main tasks.

Arsalaan with a massive tidy-up job!

JC: I’d imagine it’s hard though, because one of the first things guests pick up on is the cleanliness. AT: Absolutely. And that’s why it’s so key, because mess is so very visible and easy to pick up on. That’s why it’s crucial that every area – the floor, the toilets, the bins – are clean. Whenever you go anywhere, a restaurant for example, one of the things you tend to comment on is the toilets. It is really important that they’re clean for the comfort of the guests. JC: Complaints, when they come, can often be severe! AT: Yeah, exactly. You certainly don’t want that. That’s why we work round the clock – especially on the bins. Last night, we finished the bins around 12 o’clock, and then we were cleaning toilets until 03:30. And then we were back about around 8 o’clock in the morning. Yeah, it is full-on. But we do our best.

Taking the bins out at Jalsa is on a whole new level!

JC: You lads, all from East London – a camaraderie of sorts must develop. AT: Absolutely. It’s all teamwork. We’ve been doing it, I think, since Mubashir Siddiqi Sahib was Nazim, 15 or 20 years ago. We’ve all grown up together doing it. We keep each other motivated. Keep each other going.

Raza bringing some style to the job

JC: Well it’s a thankless but really important task. Thank you for doing it! AT: Jazakallah. It’s a pleasure to serve the guests of the Promised Messiah (as). JC:  Jazakallah. Thanks for your time. AT: Jazakallah.