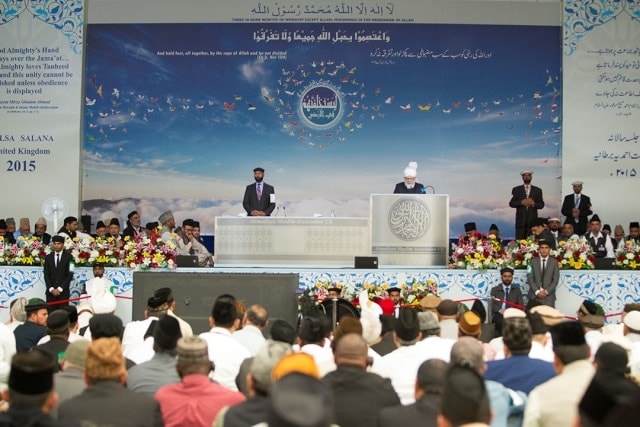 Peace and harmony have become a rare and coveted idea nowadays. The demeanour of the world hints at another global conflict in the near future and there are many stories on a daily basis which highlight the pain and suffering faced by people all around the world. In such tumultuous times, the Ahmadiyya Muslim Jamaat is a community that believes in not only preaching, but also practicing, the teachings of Islam in its true sense.

The annual conventions round the globe in various nations, including the island countries, is just one of the ways to spread the message of peace and the true teachings of Islam. It is not about creating an alarm over the state of the world, but praying and being steadfast in our beliefs.

These conventions provide a platform to reach a wider audience. The members of the Ahmadiyya Muslim Community take this opportunity to talk about the blessings of being associated with Ahmadiyyat and living under the divine guidance of a God appointed Khalifa.

His Holiness Mirza Masroor Ahmad, the leader of the community, has continuously emphasised the need for Ahmadis to look at the true Islamic teachings of the Holy Prophet (saw) and follow his guidance. On numerous occasions, Huzoor has condemned all forms of extremism and mentioned that the Ahmadiyya Muslim Community should continue to always engage in spreading the peaceful message of Islam.

Addressing the final session of the 123rd Jalsa Salana Qadian 2013 via satellite link from Baitul Futuh Mosque, London, Hazrat Mirza Masroor Ahmad said: “Where on the one hand our Annual Conventions are a means for Ahmadi Muslims to increase their religious knowledge and spirituality, they are also a means of displaying the beautiful teachings of Islam and the pure character of the Holy Prophet Muhammad (peace be upon him) to the people of the world.”

Leaders from different walks of life and government officials have been a part of the convention in the past and they have appreciated the positive effort and peaceful gathering at a level with unparalleled management and smooth operations. This year too, the UK Jalsa Salana shall be obliged by the eminent presence of many guests from around the world, both Ahmadi and non Ahmadi, who seek to be inspired by this message of peace and love for mankind.

May the Almighty give us strength and wisdom to become an instrument of peace, ameen.