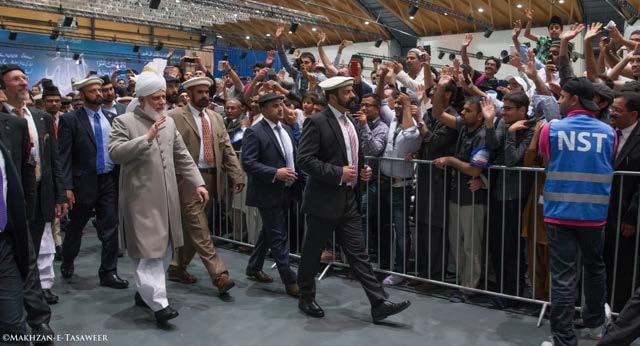 I grew up as a child to know that aside from Eid celebrations, there is always a time in the year we gather in the mosque to have feast with friends and families within the Jamaat. A wide variety of food is served in clusters, and with full joy, we eat together from the same bowl; with someone we do not share blood with as a relative; who may be of a different ethnicity. But what I noticed as a 9 year old boy was that we only dine after watching a television placed at the Imam pulpit point in the mosque.

As I matured, I realised that it is not just about a feast but a period where we gather as brothers and sisters to renew our Ba’ait, the pledge, actions and rededicate ourselves to Allah at the hand of the Khalifah of time. A special moment when millions of souls in over 200+ countries of the world unite under one umbrella of leadership as foretold centuries ago by the Holy Prophet Muhammad (pbuh).

Jalsa has always been a moment of blessing as it serves as a reminder of putting my heat and soul outrightly to the commandments of Allah. The world we live in today has many distractions that will shake one’s faith, a world full of materialistic pleasures and pursuit. Jalsa remains a global phenomenal event in the year when members of the Jamaat in the world remain firm on faith and keep the flag of Islam flying in their daily lives with a series of inspiring lectures and admonitions beautifully delivered by eloquent speakers.

Sitting side by side with friends in the mosque, sharing space on the mat and with rapt attention watching brothers of different races hug each other on TV as Jalsa proceeds in a land far away reminds me of the prophecy received by Hazrat Mirza Ghulam Ahmad ‘I shall cause thy message to reach the corners of the earth’. This has made ties of brotherhood grow beyond shores of imagination as members around the world grow affection towards a mutal friendship with brothers from all over the world who have a common understanding of the true Islam with the divine guidance of Khalifatul Masih.

Jalsa has been a point to hear amazing stories of dedicated missionaries of the jamaat around the world. How they were able, through pleasure and pain, to propagate the peaceful teaching of the jamaat from one village to the other, how kings and personalities in the world seek garments of pure love from the Jamaat. The testimonies and experiences shared is of high value, priceless. They remain an immense grace from Allah, the Exalted. I always look out for that moment Ameer-ul-mumineen reads out achievements recorded by the Jamaat worldwide and announcing additional countries the jamaat has spead to.

People speaking diverse languages unified praising Allah at the various sessions is always a moment of joy to me. Persian, Arabic, Urdu, Yoruba and Ashanti poems, were chanted to appreciate Allah’s favour on the Jamaat. what is common among the chant is ‘La ilaha illallah Muhammadur rasulullah​’, meaning There is none worthy of worship except Allah and Muhammad is His messenger. The rhytm of the poems are soothing to the ears and enchanting to the mind.

As a young boy, I always looked forward to the feast during the Jalsa period, but I have grown up to know that the blessings of every year’s Jalsa is far beyond the breaking of bread and sharing of food with friends and family.