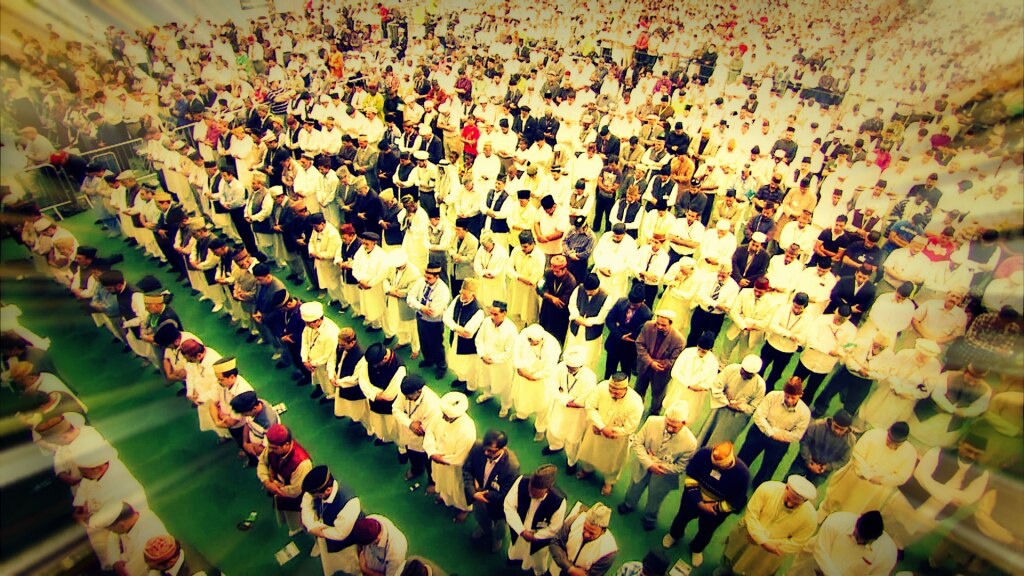 In a gathering of 35000 men and women, there are always hundreds if not thousands, who are “fresh off the boat,” as they say. They have certain signs: You will find this person overly dressed owing to British weather’s disrepute for being unexpectedly cold. The first-timer will have a copy of Jalsa program in his hand at all times.You will find him shedding tears of gratification for physically attending the Jalsa which he has been yearning to attend for years.

You’ll also find him wandering aimlessly every now and then, so be a sport and point them in the right direction.

This person is your one stop shop if you want to write a book on the history of Jalsas. He would tell you how many people attended the 23rd Jalsa, what was the topic of the 2nd Khalifa’s 2nd day speech at 1942’s Jalsa, which Nazm Saqib Zeervi Sahib recited  on the first Jalsa of the 3rd Khalifa,  how did the 4th Khalifa addressed the Mullahs of Pakistan in the 1986 Jalsa, and which bazaar staal has the best kulfie.

You’ll need plenty of time if you want to spend some time in his company, but you’ll have the best kulfie at Jalsa to keep you going.

This is the person who has been a Jalsa person all his life. Born around Jalsa time in Qadian, he spent his early childhood and Tifl years doing Water Kid duty. He spent his Khuddam years attending and volunteering Rabwah Jalsas. And as a Nasir, he hasn’t missed a single UK Jalsa since 1985. Now he is a really old Nasir and can’t stop talking about how Jalsas were different way back when.

But you’ll never hear him complain about Jalsas, because he’ll tell you every one of them is blessed.

This person can be a Ghanaian, a Pakistani, a Indonesian, a Guatemalan or he may even be a Fijian. They all have the same objective: save up money solely to attend the Jalsa UK. This person comes every year, knows the ins and outs of the UK Jalsa, plans only for the Jalsa and does not have a single clue of other London attractions. If you offer to show him around, he’ll be offended that you’re trying to take him away from Huzoor.

It’s best to let them be, and not to worry, they’ll be back next year.

Don’t ever underestimate their strength, commitment and passion. Most of them would go an extra mile to help you out. They would be wearing their best clothes topped off with wellies (if it’s raining),  will work odd hours, and will have a smile on their face despite being yelled at both by their Nazimeens and the attendees. You will see them picking up garbage, checking your Jalsa cards, working behind the scenes in MTA, serving food, making beds and cleaning  after you in the restrooms. While you enjoy the Jalsa speeches and socializing in the Bazaar, volunteers will work around the clock to accommodate 35000 guests of the Promised Messiah(as) and quench the thirst of millions others through MTA, Jalsa Radio, alislam.org and #JalsaConnect.

If you see a volunteer, say Jazakallah and shake his or her hand. They’ve earned it.

These ladies should be given an award at  the end of every Jalsa. Bringing little kids to an outdoor Jalsa is not an easy task. Standing in long queues for registration, food, milk, diaper change etc can be nerve-wrecking. Mothers do an excellent job of making Jalsa a success through their children. Kids make Jalsa more vibrant and increase cotton-candy sale.

While you’re at it, thank your mother because she went through exactly this with you.

This actually is the Na’ra (slogan) guy,  who raises slogans every 5 minutes disrupting the speech, until told otherwise by the Khalifa. The speaker will have hardly finished his opening  tilawat and suddenly NAREEEEEEE TAKBEEER fills the Jalsa Gah. You all know who I’m talking about.. And the worst part is that the one time you really want him to yell out a Naree Takbeer, he gets a bit upset that he was told not to raise too many Naree Takbeer’s.

The Over-Zealous Guy gets a bad wrap, but really, Jalsa wouldn’t be complete without him. So the next time you hear a Naree Takbeer, be a chap and respond with a hearty Allah hu Akbar!

8. The Guest who is not an Ahmadi Muslim

Every year thousands of guests attend who are not members of the Jamaat. They attend, not knowing what to expect. They marvel at the discipline, the community, the brotherhood and sisterhood, the feeling of peace and serenity, and the obedience to the Khalifa. Guests come from as far and wide as Ahmadi Muslims themselves come. And each one leaves with a feeling of amazement at what they had just witnessed.

Yes, the Jalsa is a hodge podge of wonderful souls, and you are among them. You are blessed to be among such beautiful brothers and sisters. You are a fulfillment of the promise made in the Holy Qur’an, that “And hold fast, all together, by the rope of Allah and be not divided; and remember the favour of Allah which He bestowed upon you when you were enemies and He united your hearts in love, so that by His grace you became as brothers; and you were on the brink of a pit of fire and He saved you from it. Thus does Allah explain to you His commandments that you may be guided.” 3:104

At Jalsa you get to know yourself by knowing your brothers. After all, you are the company you keep. And you learn how grateful you are that your company is, by Allah’s grace, an excellent company.

God’s man on Earth. The hope for humanity. The spiritual father to all of us. The Khalifa is the heart and soul of Jalsa UK, and of millions of Ahmadi Muslims around the world. His presence at the Jalsa makes all the difference. The “first-timer” looks at him in utter awe and suddenly feels at home. The “know-it-all” knows that his knowledge is trivial before the Khalifa’s intellect. “The veteran’s” heart grows larger at the sight of the Khalifa as he enters the Jalsa Gah. “The purist” thinks he got way more than what he had saved up for. “The Complainer’s” every complaints fades away with the Khalifa’s concluding remarks and prayers for safe journey. “The Volunteer’s” exhaustion turns into energy at a single encouraging sentence from the Khalifa. A fatigued Mother sheds tears of joy when she  sees her  little children bonding with the Khalifa. And the Over-Zealous guy reminds everyone that he’s just being honest about how everyone feels when they’re around the Khalifa.

When you see the Khalifa, pray for him that may Allah continue to strengthen his hands, and may we all remain devoted to Khilafat for as long as we shall live, insha’allah.

May you have a blessed Jalsa UK, Insha’Allah!